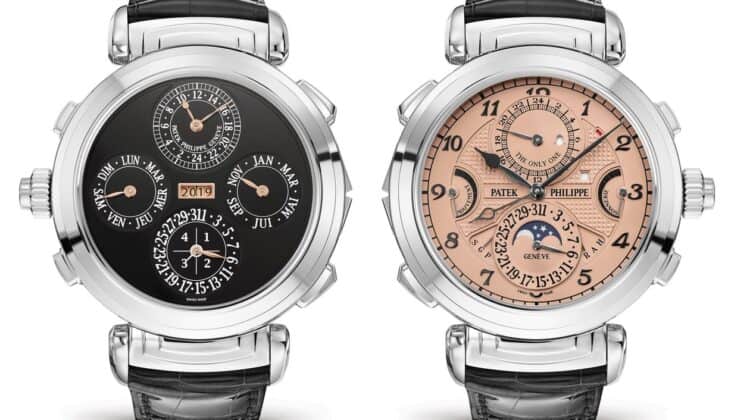 Legendary watchmaker Patek Philippe represents seven of the 10 most expensive watches ever sold. Rolex has three representations on the top 10 list. One thing is for sure if the blockbuster sales of the last few years are any indication, this list is sure to change dramatically soon. Collectors continue to show an incredible appetite for historically significant, beautifully crafted, and impossibly rare watches.

The Patek Philippe brand has been around for more than 180 years, named after it’s founders, Antoine-Norbert de Patek and Adrien Philippe. It’s one of the oldest watchmakers in existence and certainly one of the most prestigious. Some notable owners of the Patek Philippe name include some of the histories most important figures such as Pope Pius IX, Albert Einstein, Nelson Mandela, Pablo Picasso, Leo Tolstoy, John F. Kennedy, Queen Victoria, and Tchaikovsky. Patek Philippe dominates the list of the 10 most expensive watches ever sold.

There is one watch; however, that was able to bring in an astounding amount. Even though the sale was for charity, this record-breaking sale blew away the previous high mark for the most expensive watch ever sold. The Patek Philippe Grandmaster Chime sold at a Christie’s Only Watch auction in late 2019 in Geneva.

The anonymous winning bidder came home with a one-of-a-kind stainless steel watch crafted in 2014 to commemorate Patek Philippe’s 175th anniversary. It’s known as the most complicated wristwatch ever built by the company. More than seven years and over 100,000 hours of craftsmanship were spent to create Patek’s first “grand strike” watch. The stainless steel watch is inscribed with the words “The Only One” on the dial.

In 1925 Henry Graves Jr.purchased a pocket watch for $15,000. This was no ordinary watch; in fact, this was a watch that didn’t even exist when Mr. Graves paid for it. Henry Graves set out to challenge Patek to produce the world’s most complicated timepiece and would pay any price to see it through. Seven years later, in 1932, the watch was complete.

With 24 different complications, the watch was the most complicated timepiece in the world and remained that way for some time. Nine hundred individual parts are included in the timepiece, which was last wound in 1969 and remained in perfect working condition. The record sale of $23.9 million shattered the record for the most expensive watch ever sold at an auction, a record previously held by the same watch. Back in 1999, this very watch sold to Sheikh Saud Bin Mohammed Bin Ali Al-Thani of the Qatari royal family for $11 million.

In 1963 Rolex began producing Daytona chronographs to cater to professional race car drivers. Paul Newman received his very own Daytona in 1968 as a gift from his wife, Joanne Woodward. The watch included a white dial, three black subdials, and a red outer track. Joanne Woodward also added an engraving on the back of the watch, including the words, “drive carefully me.” The watch sold in 2017 for $17.7 million.

Newman wore the watch during his racing career and around the world, appearing on the actor’s wrist during photo shoots and movie scenes. After years of wear, the actor gave it to a surprising recipient. James Cox, who was dating Newman’s daughter, Nell, received the watch after spending a summer getting to know Newman and his family.

One day Newman asked Cox if he knew what time it was. James, who did not have any idea because he didn’t have a watch, was about to get an enormous gift. “If you can remember to wind this each day, it tells pretty good time,” Newman said to James as he handed over the watch. “It was kind of astonishing that he gave it to me,” James Cox was quoted in the days leading up to the recent sale. Cox wore the watch proudly for a few years before storing it in a safe deposit box as prices for vintage watches escalated. Cox said proceeds from the sale were going to Nell Newman’s nonprofit organization.

2016 saw the record set for the most expensive wristwatch when the Patek Philippe Stainless Steel #1518 sold for over $11 million. It’s one of only four of it’s kind to exist. Created in 1941, the stainless steel #1518 was the first perpetual calendar chronograph wristwatch of it’s kind. It’s the very first produced our of the four known to exist. Seven bidders started the night where the watch eventually sold to a private collector. The stainless steel 1518 comes in at number 4 on the list of most expensive watches ever sold.

The Patek Philippe Stainless Steel 5016 is one of the most elegant watches ever made. It’s impressive features such as tourbillon regulator, perpetual calendar, and minute repeater go along nicely with one of the most excellent movements ever created by Patek. At one point in time, it was the most complicated watch ever produced by the watchmaker.

The Patek Philippe Titanium 5208 sold at Only Watch auction in 2017 for $6.2 million. The Only Watch event is one of the most significant watch auctions in the world and has seen numerous record-setting sales. Launched in 2005, Only Watch is a biennial charity auction founded by Luc Pettavino and organized by the Monegasque Association Against Muscular Dystrophy (MAAMD) in association with Prince Albert II of Monaco.

The Patek Philippe 5208 was the first and only version of this timepiece produced in titanium. Currently in the 5th spot on the list of most expensive watches ever sold.

The Rolex Daytona Unicorn 6265 in white gold sold in 2018 at a Phillips auction for $5.9 million. It was part of the “Daytona Ultimatum” auction held in Geneva. The watch is known as “The Unicorn” because of its rarity by being the only known white gold manual-winding Daytona ever made. Before the discovery of the 6265, Rolex was thought to only produce Daytonas in 18-karat yellow gold or stainless steel.

This particular watch was produced in 1970 and delivered to a German retailer in 1971. Before the auction, the watch belonged to the collection of John Goldberger, who owned the watch for eight years. He had been quoted in the past as saying the Unicorn would never be for sale because of it’s irreplaceable status, although he changed his mind eventually.

The Patek Philippe Gold Chronograph 1527 sold in 2010 for $5.7 million at a Christie’s auction. This sale price made it the most expensive wristwatch ever sold at the time. It’s a unique 18k gold perpetual calendar chronograph wristwatch with moon phases manufactured in 1943 and took more than three years to design. The watch is extremely rare and hadn’t been sold for 30 years prior to the 2010 auction. It includes 23 jewels in its construction and a buckle made with 18 carats of gold.

A few reasons the Bao Dai 6062 sold for $5 million. It’s the only known model with a black dial and diamond indexes. And yes, it also belonged to the last emperor of Vietnam. They called him “Bao Dai,” which literally means “keeper of greatness.” Born Nguyen Phuc Vinh Thuy, he was the 13th and final emperor of the Nguyen dynasty and the last ruling family of Vietnam. The reference number 6062 Rolex watch was specifically made for him while he was working in Geneva.

The Patek Philippe Yellow Gold Calibre 89 sold for $5 million at auction in 2009. It boasted 33 complications and held the title as the most complicated watch in the world. It was replacing the former titleholder, which was the Henry Graves Supercomplication, from 1933. Only four pieces were made after nine years of development and production.

The pocket watch was purchased in 2009 at auction held by Antiquorum in Geneva. The watch was offered in 2013 by Christie’s in New York and had a firm asking price of $11 million. There were no takers, and the watch remained unsold. Then again, in 2017, the watch resurfaced, but no bids were meeting the reserve price. The watch remained with the previous owner, and we can only wonder if and when the watch will sell the next time it makes an appearance. Some experts expect it to top the list of 10 most expensive watches ever sold.