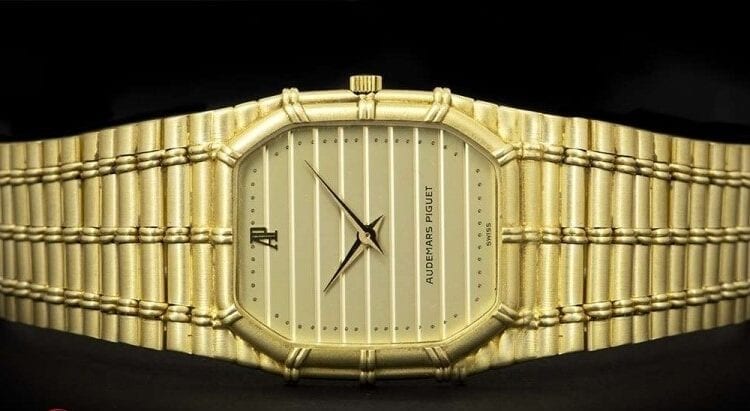 Just when you thought Google contained all the world’s information at your fingertips, you realize that might not be the case. I wanted to learn more about the Audemars Piguet Bamboo watch from the 1980s and was having an unusually difficult time learning about the vintage watch. Out of the hundreds, if not thousands of watch websites out there, it seemed that nobody was interested in the Bamboo.

Maybe there’s a good reason for it. The watch is definitely not your typical Audemars Piguet. It’s thin, the face is not much larger than the band, it looks more like a bracelet than a watch. Nonetheless, I still found the design to be intriguing, partly because it was so difficult to learn more about the watch’s history.

Currently, there are a few yellow gold Bamboo listings in the $7,000 – $9,000 price range. Most of the listings for the watch describe it as “very rare.” I continued searching for production numbers on the watch but was unsuccessful. If anyone out there knows more about the number of units produced during the 1980s, I’d sure be interested in hearing about it.

Another vintage Bamboo men’s yellow gold was listed for $7,400 and was made with the Day/Date Moon face. There was also a women’s variation I found of the Bamboo in yellow gold with 412 diamonds on its dial and bracelet totaling 4.0 carats.

Even on the internet, in this day and age we are living in, it’s still possible to find new things you’ve never seen before. I’ve looked at hundreds, maybe thousands of watches over the years, but had never seen the Audemars Piguet Bamboo model. Now I’m even more intrigued because of the sparse information on the watch. And don’t try to tell me there’s no information on the watch because nobody wants to write about an ugly watch. It’s actually a stunning design with “1980s” written all over it. Just when you thought you’d seen it all, you stumble on a Bamboo.