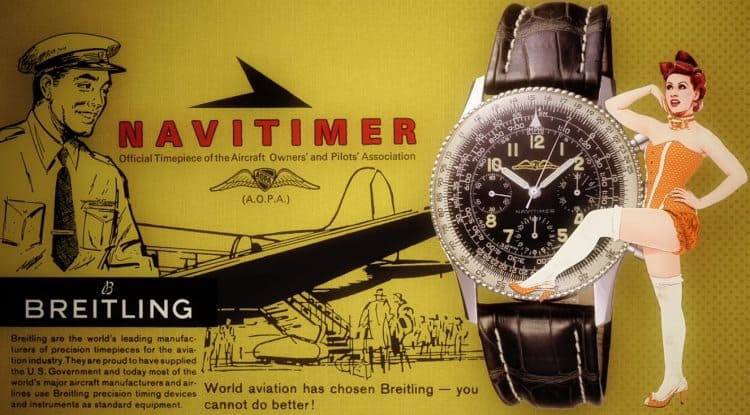 For nearly 150 years, Breitling has focused on creating incredible watches known for their functionality, reliability, and style. Dating back to 1884, Leon Breitling began producing pocket watches for a growing market of customers who wanted a sleek design, simple production process, and straightforward maintenance. For modern-day watch collectors, the Breitling Navitimer vintage watches are a symbol of function, exploration, and storied history.

As the small company began to grow, breakthroughs began to occur. In 1893, Breitling patented a movement with an incredible power reserve of eight days. Shortly after that, they reached another milestone with a chronograph that was accurate to within two-fifths of a second. Next, they featured a model with a pulsograph and logarithmic scale useful for physicians to measure pulse rates. It took just ten years for the company to sell over 100,000 chronographs and stopwatches.

Innovation continued in the early 1900s when Leon Breitling patented a tachymeter, measuring speeds from 15 to 150 km per hour. Now, not only could drivers calculate their own speeds, but police could do the same. Shortly after that, the first speeding tickets were assessed in Switzerland.

The chronograph remained at the focus of the watchmaker. The dawn of the aviation industry naturally gravitated to the watch for its valuable time measuring tools. Recognizing the opportunity in the aviation market, Breitling introduced the first model designed explicitly for the aviator in 1936. Not long after this, Breitling established the Huit Aviation Department to serve military and civil aviators with dashboard clocks and other chronometric instruments for the cockpit. Lightweight cases, easy readability, and impressive power reserves began to attract a large number of customers. World War II began, and the company received orders from the Royal Air Force to outfit fighter planes and bombers, which would go on to fight valiantly.

To understand how Breitling arrived at the Navitimer model, we must first examine the Breitling Chronomat. In 1942, Breitling produced its first chronograph, which included a slide rule to allow mathematicians to do complex calculations. Turns out, not only mathematicians were using the slide rule but also pilots, specifically the Royal Air Force and United States Air Force pilots.

This relationship between Breitling and the aviation community grew even stronger throughout the ’40s and paved the way for the new Navitimer model released in 1952. The Navitimer could calculate many critical piloting functions with it’s improved slide rule. The Navitimer has been continuously produced for nearly 70 years, making it the oldest mechanical chronograph still in production.

In 1962 Breitling launched a watch into space for the first time, worn by American Astronaut Scott Carpenter. After realizing his space voyage would require accurate timekeeping, Carpenter discussed the idea of a modified version of the Navitimer for his space journey. He asked Breitling to replace the tachymeter dial with a 24-hour display so he could read the time without translating the A.M. / P.M. designations. Carpenter’s ideas evolved into a new version of the Navitimer named the “Cosmonaute.”

The Navitimer models are known as some of the most iconic vintage pilots watches ever created. They are still sought after by aviators, collectors, and investors of all backgrounds. Values can range from $4,000 to $40,000 depending on the model, year, condition, and rarity.