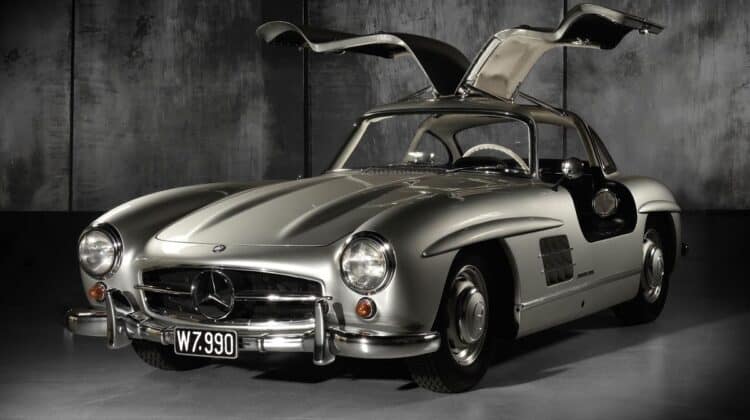 In 2015 a 1955 Mercedes 300 SL Gullwing Coupe sold at a Sotheby’s auction for $6.5 million. Mercedes produced only 1400 of the 1955 Gullwing Coupe, making cars in top condition extremely rare. Of the 1,400 vehicles produced, 1,100 of them went to the United States for purchase. Values over the last few months have cooled along with the overall market for collector cars.

The Mercedes Gullwing has a fantastic history. There was a time when it was known as the fastest car in the world shortly after it’s release in the mid-50s. Luxury car importer Max Hoffman suggested Mercedes create a toned-down Grand Prix car tailored to affluent American car enthusiasts. Initially, Mercedes did not plan to mass-produce the gullwing, but after the International Motor Sports Show in New York, the reviews were incredibly positive. Just around the time of the auto show release, Hoffman placed an order for one thousand 300 SL’s and began selling them in the U.S. for only about $10,000 brand new.

Jay Leno has a great video series on YouTube titled “Jay Leno’s Garage,” where he discusses his car collection. He considers the 1955 Mercedes Gullwing the most legendary Mercedes of all time. Jay says it was the, “Maclaren F1 of its’ day.” He also says it should be considered as one of the first-ever supercars.

The design of the car frame inhibited doors in the conventional location. Racing rules during the 50s said a racecar required doors that opened, but they didn’t specify how they opened. The idea for the gullwing doors was introduced and proved to be a huge success.