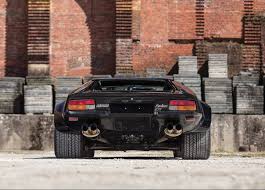 The Pantera was designed by Italian Tom Tjaarda and produced by auto manufacturer De Tomaso from 1971 to 1993. Alejandro de Tomaso founded the car company in Modena in 1959. Originally the car maker focused on various types of racing cars including Formula One. The cars logo included a T-shaped symbol that was the brand used by De Tomaso’s Argentinian cattle ranching ancestors.

In 1971 Ford acquired an 84% ownership stake in De Tomaso where they began powering the cars with a 5.8L Ford Cleveland engine. The combination of Ford power with Italian bodywork made it a classic Italian-American hybrid supercar.