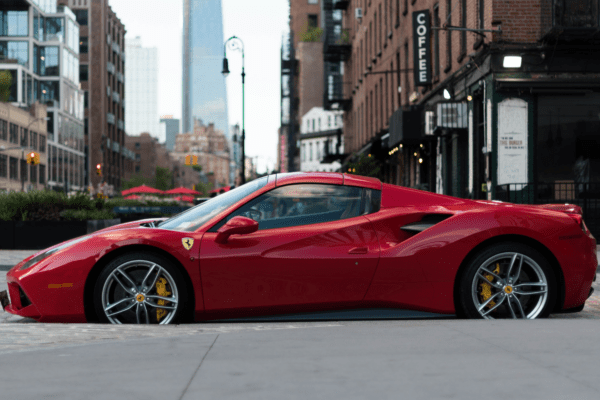 The Ferrari 488 Spider takes us back in time to a simpler day. A time when the luxury carmaker unveiled its very first mid-rear engine v8 Berlinetta. This was the late 1970s when Ferrari launched the epic 308 GTB.

Over thirty years later, Ferrari re-opened the history books and created the Ferrari 488 Spider, an amazing machine worthy of the “little prancing horse” logo on the side. With the Ferrari 488 Spider, not only did Ferrari build one of the most impressive supercars in the world, but, as they do perhaps better than any other carmaker, they paid tribute to their rich history.

Acknowledging Ferrari’s legacy and heritage is clearly evident in the 488 Spider. To better understand the 488 Spider, we have to go back and look at perhaps the most iconic Ferrari of all-time, the 308 GTS Quattrovalvole, otherwise known as, The Magnum PI Ferrari.

Released for the first time in 1975, the 308 was an instant classic because of the sharp contrast in design from the Dino 246, which it was replacing. The car was such a huge success; it gained enough attention to be cast as a co-star alongside Tom Selleck in one of the greatest T.V. shows of the 1980s, Magnum P.I.

It’s so much fun to learn about the history of Ferrari. However, if you only focus on the classic Ferraris of the 50s, 60s, 70s, and 80s, you’ll miss out on one of the company’s most impressive components; the innovation happening right now. Recently released models show the amazing engineering packed inside each car year after year, and it’s easy to miss if you’re just simply discovering the collector models.

For example, the Ferrari 488 Pista and Pista Spider will blow your mind with over 700 horsepower and 0 to 100 times in just over five seconds. I can’t even do justice describing the recently released Ferrari LaFerrari, or known as “The Ferrari.” It really deserves its own book to thoroughly explain just how unbelievable this machine is. But I can give you a teaser, it’s almost 1,000 horsepower, valued at over a million dollars, and only a few hundred were produced.

I cannot go much further discussing the Ferrari 488 Spider without mentioning Flavio Manzoni. Who is this man, Flavio? He’s an architect and automobile designer and Senior Vice President of Design at Ferrari. Flavio Manzoni is responsible for dozens of the finest supercar designs of the last twenty years, including the 488 Spider.

Not only was the Ferrari 488 Spider created from the tip of his pen, but also the epic LaFerrari, the Ferrari California, the F8 Tributo, and countless others. When Flavio Manzoni says, “Ferrari always redefines the limits of the possible,” it’s easy to believe the company is more focused on this goal than it’s ever been. By striving to align form and function, Flavio Manzoni is proving his greatness year after year.

Car guru Doug DeMuro reviewed the Ferrari 488 Spider, and you can get a sense of why this car is amazing by watching the end of his video. As he takes the 488 on the road, you can see his smile as he punches the gas. You can watch his entire video here. There’s not much more evidence required than to watch the expression on someone’s face as they drive an amazing car. The 488 is an absolute thrill machine. Case closed.

It’s hard to predict how certain supercar models will age and if they will become epic collector pieces worthy of ultra-rich investors and the museum floor or decline in value and slowly drift into indifference. This debate is what makes collector cars so much fun. Culture and trends, supply and demand, fear and greed constantly shift over time, creating new superstars. Thirty years from now, I wouldn’t be surprised to see the Ferrari 488 Spider as one of the most desirable supercars from this era.

Don’t Take Your Eye Off the Ball

Many collector car enthusiasts might miss some of the most amazing new models produced over the last few years. I’m definitely guilty of taking my eye off the ball when it comes to new releases coming out of Ferrari year after year, but when I take a few minutes to catch-up, I’m always blown away by the pace of supercar evolution.

Not only that, Ferrari is dedicated and intent on embracing its epic history by attributing classic features to the latest designs. I’m afraid the amount of thought and retrospection that goes into producing the current lineup of Ferrari models is sometimes underappreciated. It’s safe to say the car company seldom makes a move unless it’s strictly aligned with its storied history and legacy of the last eighty years.

In a tribute to the 308, the reboot of the 80s hit show, Magnum P.I., features the Ferrari 488 Spider. Intense debate surrounds this spin-off show, as Magnum “purists” and fans of the Tom Selleck version will most likely argue there can never be anything as good as the original. But change is constant and persistent. It might be beneficial to embrace the evolution of pop culture, sports cars, and television re-makes.

The same way Ferrari is constantly ‘tipping its cap’ to their rich and storied history of performance, power, and elegance, any television show reboot of a classic that also pays tribute to the icons is approved in my book. I only ask that you approach the Magnum re-boot with an open mind and admire the original throwback appearances. Consider adding this show to your Netflix queue; it could bring some enjoyment and nostalgia.

Paying close attention to the past and honoring the best aspects of a simpler time is an art form. Ferrari understands this concept perhaps better than anyone.