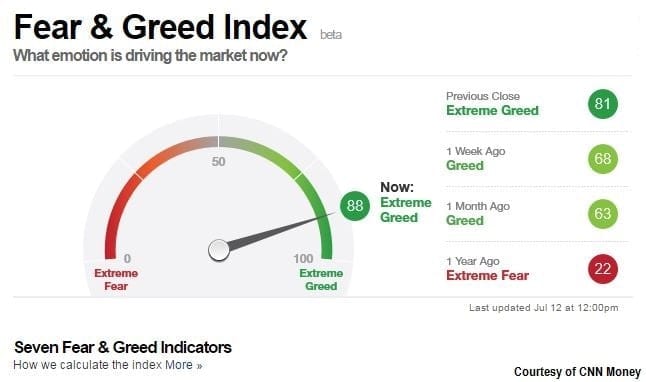 You hear the words fear & greed in investing almost more than any other combination of words. Warren Buffett did an excellent job promoting the phrase when he said to, “Be fearful when others are greedy and greedy when others are fearful.” He mumbled these words probably around the time of his first television interview back in the mid-1980s, and the phrase has been gaining popularity since then.

There’s an interesting gauge of sentiment among market participants called the CNN Fear & Greed Index. The index looks at seven different market indicators and how far they’ve moved from their normal range. All seven indicators are then combined with an equal weighting for a final index reading. The financial crisis in 2008 caused the fear and greed index to plummet to a reading of 12. A few years later, in 2012, when markets were recovering, the index was soaring into the high 90’s.

The CNN Fear & Greed index does an excellent job of capturing the emotions of the market during a given period. There are dozens of indicators the creators of the index could have selected, but the seven they decided on have shown to provide an accurate snapshot of current emotions. Here are a few of my favorite indicators showing greed and fear included in the CNN index.

The put & call ratio is a gauge of investor’s overall mood in markets. While a ‘put’ is a right to sell an underlying asset at a set price, a ‘call’ option is a right to buy an asset at a predetermined price. If traders are buying more calls than puts, it can very often be a sign of rising bullish sentiment or an indication that markets will rise in value. When traders buy more puts than calls, it can indicate bearishness in the markets.

The put & call ratio is a contrarian indicator where at extreme levels, it can signal turning points in markets. Reversals either up or down are sometimes followed by extreme readings in the put and call ratio.

Market volatility is commonly measured by the CBOE Volatility Index or the ‘VIX.’ The vix calculates a measurement of expected volatility in the U.S. stock market. It’s derived from real-time prices of the S&P 500 call & put options. You can see in the chart below, where the vix hit a high of nearly 80 during the financial crisis of 2008 and 2009, where the stock market sank along with global markets and economies.

Markets can swing from fear to greed many times throughout a given year. Over the long term, patterns emerge where investors let their emotions make decisions for them. The chart below shows a clear portrayal of a full cycle of market emotions. Beginning with optimism and excitement, prices are bid up, and things look safe, and profits are easy. Easy profits lead to thrill and eventually euphoria as everyone is convinced the good times will never end. As thoughts turn, anxiety grows, and there’s a denial that the good times are over.

As the market continues to fall, fear sets in, and desperation turns to panic. Emotions take control at the extremes where capitulation and despondency are widespread. Markets now acknowledge the fact that things are bad with no end in sight. Depression sets in among market participants, where the thought of higher prices seems impossible. This is where recovery is born, and there are no more sellers to be found. The turning point begins, and hope is renewed. Some relief and soon after, a touch of optimism can be found where the cycle is now complete.

The cycle of market emotions happens over and over, year after year, decade after decade. As long as people are participating in markets, there will be a similar cycle in the years to come.