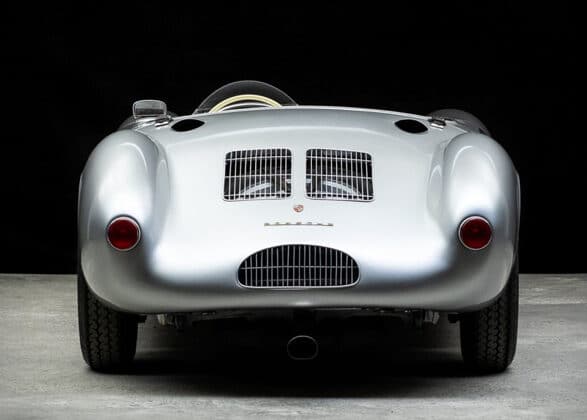 From 1953 to 1956, only 90 Porsche 550s were produced. The 550 Spyder was inspired by the Porsche 356, but it was set extremely low to the ground to make it even more efficient for racing. So low that racer Hans Herrmann drove it under a railroad crossing gate during the 1954 Mille Miglia race.

After it’s first victory, the 550 won its class in the 24 Hours of Le Mans and the Carrera Panamericana. Over the next few years, the Porsche 550 Spyder was usually finishing in the top three spots in its class.

Actor James Dean was an owner of a 356 Porsche Super Speedster and quickly traded it in for a Spyder. He was able to get the 130th Porsche 550 Spyder produced when he took delivery of the car at Competition Motors in Hollywood, CA. Just nine days later, he was killed in a crash at an intersection near Paso Robles in California at the age of 24.

Mid 50s Porsche 550 Spyder sales don’t come around very often. In 2016, an exceptional example sold for over $5 million. From the Jerry Seinfeld collection of Porsche cars, the Spyder was totally original and unrestored with only 10,500 miles. It also included the original as-delivered color scheme and incredibly well preserved interior upholstery.

Back in 1955, a new Porsche 550 Spyder sold for $6,800, so obviously, there’s been incredible appreciation over the last 65 years. An amazing track record when it came to racing is one of the reasons. Not to mention the history and heritage of the Porsche brand. Limited production is definitely another primary factor in the 550 Spyder’s soaring values over the years.