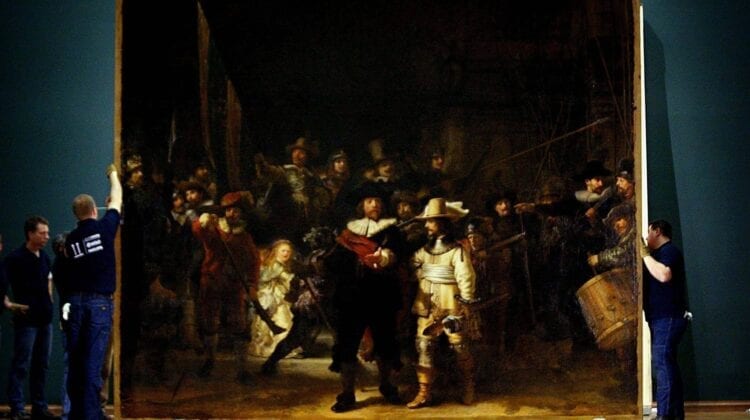 Every picture tells a story, and every Rembrandt painting seems to unveil the painter’s genius. This is certainly the case with the famous Rembrandt Night Watch painting. Where the more you learn about his work, the more intriguing the Dutch painter becomes. Some have called Rembrandt one of the greatest visual artists of all time and, without a doubt, the most important in Dutch history. With ‘Night Watch,’ Rembrandt took what was to be a simple and straightforward commissioning and turned it on its head. Legendary artists don’t follow the rules; they redefine what is possible and leave timeless, priceless masterworks in their wake.

Rembrandt’s Night Watch, painted in 1642, is not the original name, but a title given at the end of the eighteenth century. The original name of the painting was ‘Officers and Men of the Company of Captain Frans Banning Cocq and Lieutenant Wilhelm van Ruytenburgh.’ The painting had darkened by the accumulation of dirt and had begun to reflect a night scene. The painting was initially a daytime scene, including sunlight.

The city of Amsterdam would typically display portraits of the civic guardsmen, who served as defenders and protectors of the city. Each company of guardsmen has its own guild hall where they would assemble for weapons training and gatherings. These assembly halls were decorated with group portraits of the most distinguished members to promote a sense of pride within the city walls.

Three aspects of the painting stand out. The incredible size, the dramatic use of shadows and sunlight, and the perception of motion within the painting. Google Arts and Culture has a great summary of the finer details within the painting. I would highly encourage you to visit their site. High-resolution images show details within Night Watch that initial glances would not be able to notice. It’s thought that Rembrandt even painted himself in the background of the painting, where a figure resembles many of his self-portraits he created.

Standing Out From the Crowd

When Rembrandt was commissioned to paint the civic guard portrait, he was near the height of his popularity as an artist. Do you think he was actually going to reproduce a typical group portrait of that time period? Commissioned paintings featuring civic guards usually were rather plain, boring paintings showing each group member in rows, with no movement, light, or action. This is where Rembrandt changed the game and executed a completely new way of depicting a group of people.

The unveiling of Nigh Watch was not met will overall enthusiasm, initially. Many of the group’s members were disappointed they were displayed in a less prominent place than others in the painting. After all, each member of the militia paid an equal amount to Rembrandt to create the portrait. Now, some of the men in the painting were barely visible, while others had sunlight cast directly on them.

One of the most famous paintings in the world is undergoing the largest restoration and research project in the history of The Rijksmuseum. During the restoration, a live YouTube video feed will be available with updates to the restoration’s status and detailed commentary of the research efforts.

The painting has also been the subject of individual attacks and vandalism on multiple occasions, prompting the museum to restore various painting sections over the years.

Rembrandt’s Night Watch is one of the most famous Dutch Golden Age paintings and certainly one of the most valuable. During one of the vandalism attacks where a man sprayed acid on the painting in 1990, a valuation was done after the piece was restored. Estimates at that time valued Night Watch at about $925,000. A modern-day sale of the painting would surely be in the tens of millions; I would have to assume—possibly one hundred million or more. I’m sure the Amsterdam Museum considers the painting priceless. The painting is displayed in the Rijksmuseum as the most well-known piece in its collection.