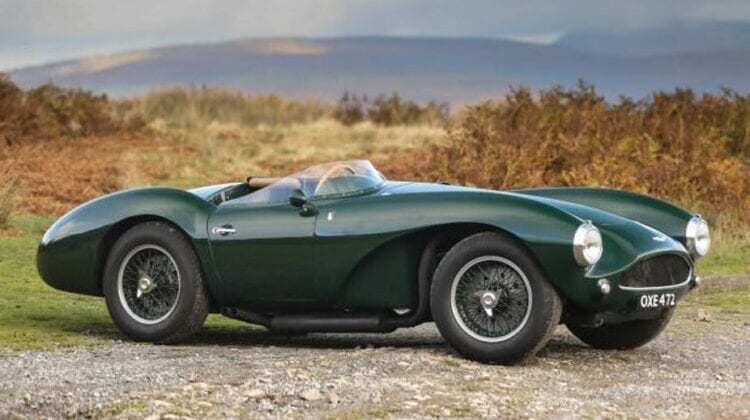 The Aston Martin DB3 was a British sports car built in the early 1950s designed specifically for speed on the racetrack. Not only did the engineering team at Aston Martin make a huge impression on the racing world with the DB3 car that could compete with just about anyone, but they also created a foundation for the amazing DB series that would carry the brand for the next 60 years.

Some of the most well-known and beautifully designed Aston Martin’s wear the “DB.” Beginning with the DB2 in 1950, the legacy of the DB model has never been stronger. The “DB” stands for David Brown, the businessman who purchased Aston Martin in 1947 and propelled the car company into one of the world’s most iconic brand names.

From just 15 initial cars produced in 1948, which were later renamed the ‘DB1,’ the David Brown era was off to an impressive start. The car won the first race it entered, the 1948 Spa 24 Hours, and Aston Martin was on the road to racing success. The company built 410 DB2 models, which seems like a low production number nowadays, but at the time, this was a significant volume for the small auto company. The DB2 also brought more success on the race track with top-three finishes at Le Mans and Sebring.

By 1952, Aston Martin engineer A.G. Watson created a lightweight and superfast chassis on the DB3 by reducing the wheelbase’s aluminum. The DB3 originally featured a 133 horsepower 2.6-liter engine pulled directly from the Aston Martin DB2 Vantage. It was quickly noticed that a larger engine was needed for racetrack supremacy, so a larger 2.9-liter engine with 163 horsepower was quickly inserted into the frame of the car and the Aston Martin racing team was on their way to competing for top finishes in the biggest races of the 1950s.

There were only five Aston Martin DB3s created in 1952 and were only to be used for racing. However, later in 1953, Aston Martin decided to build five additional customer models of the DB3 as the engineering team moved on to work on the new DB3S. Chassis numbers 6 through 10 were sold to the public, but many ended up back on a racetrack one way or another.

After some mild success with the DB3, but still lagging behind the Jaguar C-Type, Aston Martin was determined to improve their racing results, and the DB3S was designed. Aston Martin owner David Brown brought in Willie Watson, and the engineering team based the DB3S on the previous DB3 but featured a lighter chassis and smaller wheelbase. Ten DB3S’s were produced from 1953 to 1956, and the second batch of DB3S’s was created from 1954 to 1956. Overall, a total of 31 cars were produced by Aston Martin from 1953 to 1957, and of those 31 cars, 11 were used primarily by the racing team.

There’s been a few sales of the DB3 and DB3S over the last few years. A few examples have been valued at over $10 million, including the fifth model created, raced by Stirling Moss, Peter Collins, and Roy Salvadori. It was the same model which was originally created by the company’s owner, David Brown. After three other racing models were destroyed in crashes during Le Mans in 1954, Brown turned over the car to the racing team.

Setting the Table for the Future

The success of the DB3 and DB3S would set the stage for Aston Martin to develop the DB4 and eventually, the DB5, which will forever be remembered in the James Bond film, ‘Goldfinger.’ The story goes that Sean Connery was set to drive the Jaguar E-Type in the upcoming film, but when the movie producers discovered Jaguar wanted to charge a fee for the use of the E-Type, a call to Aston Martin was made. The rest is history.

David Brown went from purchasing a struggling automaker to winning major auto races with his DB2s, 3s, and 4s, and seeing his DB5 model become “the most recognizable car in the world” after Sean Connery drove the vehicle on the big screen. Needless to say, the Sean Connery ‘Goldfinger’ DB5 is the Aston Martin’s most recognizable car of all time, but there’s an argument to be made that by David Brown doubling down on the race track with the DB3 and DB3S in the early 1950s, it made everything that was to follow for the car company possible.