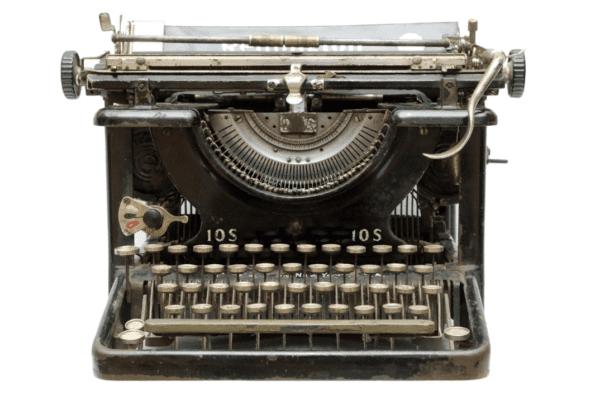 The vintage typewriter is making a comeback. Humans have been swept up in the digital age for some 30 years now. The advent of personal computers, digital cameras, commercial equipment, and more have changed human life beyond our ancestor’s wildest dreams. The speed of innovation sees no end, and what was once science fiction is now both tangible and virtual reality.

From Digital to Analog

Digital devices like computers take once time-consuming tasks and streamline them to improve quality and speed. However, the advances and efficiency do have a drawback. Something is lost when a once analog process becomes digital.

In the music industry, digital recordings lack the warmth and texture of some analog recordings. Movie aficionados search far and wide for old film reels to experience the film footage in its raw form. Classic car enthusiasts and steam locomotive purists seek the sounds, clammers, smells, and personality while experiencing rides in old-world machines.

There is something about the old that captures our imagination. The intrigues of past machines and artistic craftsmanship satisfy our need for the rustic and ornate. The past several years have seen another relic rise from partial obscurity that in the grander scheme of things was not too long ago.

The Rise of the Vintage Typewriter

We are talking about the typewriter. For many, it’s a severely outdated contraption with no use in the modern world outside of being a museum piece. Yet, for some, vintage typewriters have untapped value.

The old typewriter has seen an uptick in popularity in recent years and many people look to own one for a variety of reasons. Some wish to collect antique typewriters as a valuable keepsake. Others wish to find retro typewriters to complement a trendy steam-punk décor. And then there are the individuals who acquire the tactile experience of typing directly to paper, to match the great writers of the past.

With the distraction of the modern digital world, writers look to vintage typewriters as an escape. The humble typewriter gives writers a medium to connect their words to the page, feel the weight of the keys under their fingers. The sound of metal levers and cogs fill their dwellings like gentle rain in the absence of smartphone beeps and flashing screens.

We’ll uncover a brief history of the typewriter, the most successful brands, and what to look for when searching for a vintage typewriter of your very own.

A Brief History of the Typewriter

The typewriter has been a feature in human life since the late-19th century. Even though the standardized design only came into production in the early 1920s, the first patents go as far back as the early 18th century.

A typewriter is a mechanical or electromechanical device that uses keys to imprint words onto a sheet of paper. For most of the 20th century, the typewriter was an essential tool in business, education, publishing, and for artistic pursuits in writing.

However, by the 1980s, the development of the personal computer and the word processor quickly made the typewriter obsolete. Word processing software made the mechanical or electric typewriter slow and cumbersome and allowed for the transmission of information directly to a network.

Who Invented the Typewriter?

The typewriter does not have a single origin. No one person historically is credited with the invention of the typewriter. Moreover, historians have approximated that typewriter inventions had 52 different forms over the centuries.

The concept of the typewriter we know today first came into existence in 1714. A British inventor named Henry Mill received the first patent for a machine that is close to what we know as a typewriter. The title of his patent was labeled, “Impressing Writing on Parchment.” However, this machine was never built. Pellegrino Turri was another early investor who produced a working prototype but has not survived.

Some credit Agostino Fantoni for inventing the typewriter in 1802. He developed a typing machine to help his blind sister. Soon after, in 1829, a device called the “Typographer” was invented by Willian Austin Burt. The machine was still slower than writing by hand and Burt never managed to put his machine into production. By 1855, Italian inventor Giuseppe Ravizza built a prototype called the “Cembalo scrivano o macchina da scrivere a tasti.” This was the first machine that allowed the typist to see the words as they typed.

The 1860s saw more development with different typewriter patents being issued to different inventors. In Brazil, priest Francisco João de Azevedo created the typewriter to high acclaim, while in Denmark, Rev. Rasmus Malling-Hansen invented the Hansen Writing Ball. His machine was the first typewriter that went into production in 1870.

Malling-Hansen placed letters on short pistons that worked directly through a ball mechanism and onto paper. The placement of the letters coincided with letters most frequently struck, which made the machine faster than a pencil to paper.

Another one of the first commercially successful typewriter goes to three inventors from Milwaukee, Wisconsin. In 1867, Christopher Sholes, Samuel W. Soule, and Carlos Glidden collaborated on the invention but later sold the patent to Densmore and Yost. The famous sewing machine company E. Remington and Sons diversified their business and took on the Sholes and Glidden Typewriter in 1873.

Standardization in typewriter design came about in the early 1920s. All manual typewriters followed the basic concept of each key attached to a typebar with the corresponding letter striking the paper. When a typist strikes a key, the type bar hits an ink fabric ribbon in front of a cylindrical platen. The platen rolled a sheet of paper, rotated by a lever on the left of the machine called a “carriage return lever.”

The advent of electric typewriters only became prominent commercially around the mid-1960s. However, the first ideas and designs go back almost a hundred years earlier to the Universal Stock Ticker, invented by Thomas Edison in 1870.

The first authentic electric typewriter was invented in 1902 by the Blickenderfer Manufacturing Company. It never became a commercial product, but it was the first machine to use a typewheel instead of individual typebars. While innovative, the machine never caught the interests of businesses or personal users.

The designs and developments of electric typewriters took many forms, but they only archived prominence with the work of IBM. IBM brought out the Selectric typewriter, which replaced the typebar design with a golf ball-sized spherical mechanism. An electric motor operated a selection of latches, pulleys, and metal tapes to rotate the spherical mechanism to strike against the platen.

By the 1980s, several hybrid typewriters with computer features made their way onto the market. These generations of typewriters had keyboards like our modern personal computer keyboards. The development of thermal transfer devices used in thermal label printers was incorporated into these typewriters. The innovation in printing technology coupled with word processing software quickly put the typewriter out of business from the late 1980s.

Most Famous Typewriter Brands and Their Value

A vintage manual typewriter has become a collector item in recent years. As typewriters have a long history, many famous brands enjoyed commercial success during their time. We’ll take a look at some of the oldest vintage typewriter brands and what you could expect to pay at your local auction house.

The first iterations of modern typewriters were oddly shaped compared to what we know and love today. The world record for the most expensive vintage typewriter sold goes to the 1878 Hansen Writing Ball at $123,125.

The Underwood brand was successful in its day. The Wagner Typing Company produced Underwood, and the earlier models can sell for over $1000. The Underwood models from around the 1920s can fetch a price of around $500.

Remington became a household name for typewriters. The very first Remington model that hit the market was called the “No. 1 Old style” and originally sold for $47.50. The Remington portable typewriter was one of the most popular models. By the 1930s, Remington produced the “visual typewriter,” you could see the paper while typing (a revelation at that time). In 2014, a Remington No. 1 sold for $27,000.

The Chicago-based company produced one of the best vintage manual portable typewriters of its time. Oliver is known as the first commercially successful visual typewriter. Oliver typewriters from the early 20th century can sell for over $500 in good working condition.

Smith-Corona made a wide selection of typewriters, some featuring elaborate metal levers and circular type sections. The Corona 3 typewriter became a hit with buyers as it was compact (for its day) and folded into a carry box for easy portability. Even though it’s one of the most common typewriters, a Corona in good condition can sell for over $300.

There are many other influential vintage typewriter brands beyond the five we mentioned above. The Royal Quiet Deluxe manual portable typewriter was produced by Royal Typewriter Company in the 1940s and 50s. This particular machine happened to be the typewriter of choice by Ernest Hemingway.

If you own a vintage typewriter, you should take the time to find the proper paper for your original vintage machine. What you need is paper that’s extra absorbent and thicker than typical printer paper, so the print is clear and crisp. Cotton paper performs well, and is recommended for vintage typewriter use.

Why Purchase or Collect Vintage Typewriters?

We have only scratched the surface of typewriter brands and their wide range of designs and features. Now that old typewriters have gained interest again, why would you purchase or collect a vintage typewriter, and what are the price ranges?

Vintage and antique typewriters sell for a wide range of prices. For just a couple hundred dollars you can find a one-hundred-year-old typewriter that actually still works. The rarer and higher quality machine, the higher price you will pay.

How to Purchase a Vintage Typewriter

Now that you know a little more about vintage typewriters, how should you go about finding and buying one? There are several factors you need to consider when purchasing a typewriter for the first time.

First, even though we are focusing on antique typewriters, they are still manufactured today. Brands like Royal Classic are available from most retail websites like Amazon and Staples. For vintage typewriters, there are both the manual versions and the electric versions.

The two common types of typewriters are desktops and portables.

Desktops are durable, full size machines made for office or home use. They can be heavy at over 20 pounds and can handle frequent use.

Portables are smaller portable typewriters. They lack all the features of desktop typewriters and are less reliable.

Then, consider the following points when looking for a typewriter:

Here are a few tips to help assess the condition of a vintage typewriter:

1. The decals must be legible and in good condition.

3. Mechanical parts must be original.

4. The platting should be unpitted and original.

5. All mechanisms must be in working order

6. If portable, the original case should be in good condition.

7. Make sure to acquire proper shipping methods if bought online.

Vintage typewriters are no longer a dusty artifact for the museum. Today, typewriters are regarded as a work of art, and a valuable collectible preserving the legacy and history of writing in modern times. The sound of the metal mechanisms and the smell of fresh ink capture the tactile feel of writing lost with modern technology.

There is a growing interest in typewriters from machines for efficient daily use or collectibles for vintage nostalgia. With enough time and research, you can find the best typewriter to bring you back to a past world of writing.