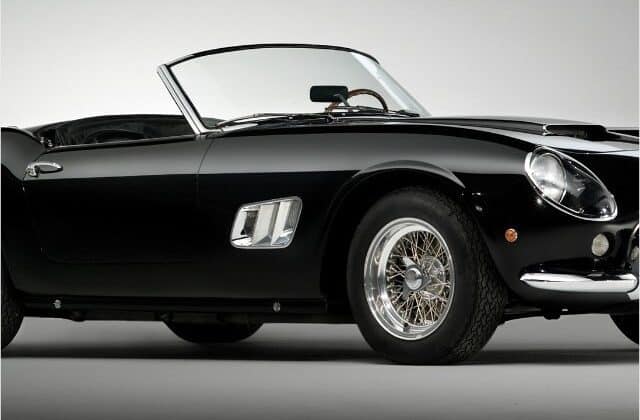 Ferrari dominates the list, but Mercedes, Aston Martin, Jaguar and Alfa Romeo are also included to make up the current list of auto manufactures to produce the 10 most expensive cars ever sold.

A few recent sales indicate extreme demand for the 1962 Ferrari GTO. At a 2018 RM Sotheby’s auction in Monterey, California there was a record breaking sale for any car at an auction when the GTO went for $44 million. Former Microsoft executive Greg Whitten sold the car after owning it for several years. The model was known as the 3rd of 36 total models built by Ferrari. With it’s extensive racing history during the 1960’s the car had already built a reputation for greatness.

Another private sale in 2018 saw a ’62 GTO sell for $70 million. The car was purchased by David MacNeil of Chicago, IL who was the founder of auto accessory company WeatherTech. There’s also rumors of a separate private sale for somewhere around $52 million by collector Paul Pappalardo in 2013.

There’s many reasons the ’62 GTO commands such incredible prices. One of the biggest reasons is it’s extremely limited supply of only 36 models, all which are still accounted for. It’s timeless design by Giotto Bizzarrini and the one of the last classic front-engine cars before the GT’s evolved to mid-engine placement. Another interesting fact that keeps prices screaming for the GTO is the fact that it was the last of it’s kind as a road racer. Meaning that you could drive the car to the track, race the car and drive it back home again. Shortly after ’62 models rolled off the production line, racing would evolve along with it’s tighter regulations and safety requirements. It was a true road racer sports car.

Auction house Artcurial held a sale in Paris in early 2016 for the 1957 Ferrari 335 Sport Scaglietti. The car sold for nearly $36 million. A V12 engine with nearly 400 horsepower reaching speeds of 186 miles per hour and minor interior finishes, the car was built for road racing.

The car was part of the legendary Bardinon collection, which included hundreds of cars and over 70 extremely rare models. Pierre Bardinon was an heir to the French Chapal family who owned a leather and fur company. He became passionate about road racing, Ferrari’s and the Le Mans race. At his castle in France he actually turned nearby fields into a racetrack for his cars. Enzo Ferrari, the founder of the Ferrari brand, was once asked if he would create a Ferrari museum. He responded that such a museum already exists at Pierre Bardinon’s house in France. It was one of the highest complements Bardinon could have received.

The car has a storied racing history with legendary drivers at the wheel. The 1957 Ferrari 335 S appeared in the Cuba Grand Prix driven by racing legend Sir Stirling Moss in 1958. It also competed in the Venezuela Grand Prix and the Swedish Grand Prix.

Some gruesome racing history is included with the 335 S. The Mille Miglia race through Italy from Brescia to Rome and back was eventually canceled because of a crash involving the car. Alfonso “Fon” de Portago was the driving the 335 S when he crashed into spectators near the village of Guidizzolo. Several people were killed including Portago and his co-driver. From public outcry the race was canceled for good.

Mercedes-Benz produced only 16 of the W196 “Silver Arrow” cars and only 10 are still in existence. The nearly $30 million sale of the W196 was a model that was driven by racing legend Juan Manuel Fangio to victory in the 1954 German Grand Prix and Swiss Grand Prix. Fangio was considered by many to be one of the greatest racing drivers of all time.

The vehicle was sold at a Bonhams auction in 2013. Purchased at the Goodwood Festival of Speed in Britain by an anonymous bidder, the car made headlines for not only it’s huge price tag, but also for being one of the highest priced vehicles which was not produced by Ferrari. At the time of the sale in 2013 the Mercedes W196 set a new record for highest price ever paid for a car at auction. A record that was previously set in 2011 with the sale of a Ferrari for nearly $15 million.

Some of the car’s innovative designs included a fuel-injected engine, inboard mounted brakes, lightweight chassis design and an all-independent suspension. At the time of the sale, auction house Bonhams called the Mercedes W196 the, “most important grand prix racing car.” As more and more amazing cars are offered at future auctions the list is sure to change but currently the 1954 Mercedes-Benz W196 is number 3 on the list of 10 most expensive cars ever sold.

Sotheby’s auction house sold the 1956 Ferrrari 290 MM in 2015 for $28 million. The chassis 0626 was built for racing legend Juan Manuel Fangio. The car was specifically designed for the famed racer and five time F1 world champion. It was one of only four 290 MM models produced. It featured a 3.5 liter, V-12 engine. Fangio raced the car in the 1,000 mile Mille Miglia,which goes through Italy. He would finish fourth in the race.

The car has never crashed in all it’s race appearances. In 1857 drivers Eugenio Castellotti, Masten Gregory and Luigi Musso piloted the car to victory in the Buenos Aires 1000.

The 1967 Ferrari 275 GTB/4 NART Spider by Scaglietti was sold in 2013. The car was purchased new by Eddie Smith Jr. of North Carolina and had a single owner. The Ferrari is just one of only ten NART Spiders ever produced. The NART was to signify the North American Racing Team, which was started by Ferrari North American importer, Luigi Chinetti.

The car featured 300 horsepower with a 3,286 cc four overhead camshaft V-12 engine. Also included were four-wheel disc brakes, four-wheel upper and lower wishbone independent suspension, five-speed transmission and a tubular steel frame. The chassis number 10709 was all matching numbers with one original and dedicated owner who took possession directly from the production line in Italy.

The winning bid of the most recent sale in 2013 went to Lawrence Stroll who was a Canadian businessman who helped create Tommy Hilfiger clothing brand in the 1990’s. The family of the owner, Eddie Smith Jr. who passed away in 2007, donated the entire sale proceeds to charity.

A total of three 1964 Ferrari 275 GTB/C Speciale cars were produced. When the first one off the production line heads to auction you know it’s going to bring a huge pricetag. The 2014 auction by Sotheby’s in Monterey California included the 320 horsepower Ferrari, chassis number 06701, and the sale topped $26 million.

There were 453 cars produced under the 275 GTB line in 1964. Only three 275 GTB/C Speciales were assembled especially for the 1965 running of the Le Mans race. The ‘C’ stands for Competizione. The very first car produced, chassis number 06701, never saw the race, but the well documented history helps make this car one of the most incredibly rare collector items in history.

Of the other 2 CTB/C’s in existence, they are both in the hands of private collectors. One of the private collectors, Preston Henn, recently passed and there’s speculation as to weather his 1964 Ferrari 275 GTB/C Speciale will see an auction anytime soon. Henn’s model, chassis number 6885, actually saw racing action. The car owned by Preston Henn won the GT class and finished 3rd overall at the 1965 Le Mans. With the sale of the $26.4 million GTB/C that recorded no racing action, there’s speculation that if Henn’s car ever saw an auction it could break all records currently standing for most expensive car ever sold. The list is sure to change, but currently the 1964 Ferrari 275 GTB/C Speciale sits at the number 6 spot on the list of 10 most expensive cars ever sold.

The first of only 5 DBR1’s in existence sold at a Sotheby’s auction in 2017 for $22.5 million. Some consider the DBR1 the “most important Aston Martin ever produced.” The sale surpassed the 1955 Jaguar D-Type as the most expensive British car ever sold at an auction. Only seven minutes of bidding were needed before one of the two bidders from private collections walked away with the vehicle.

The car was a winner at the 1959 Nurburgring 1000 race. Driven by Roy Salvadori, Stirling Moss, Carroll Shelby and Jack Brabham, among others. The DBR1 featured a six-cylinder engine producing 268 horsepower. The car was awarded the ‘Most Elegant Sports Car’ Trophy at the Pebble Beach Concours d’Elegance in 2001. This was the first time ever a DBR1 has been sold at an auction publicly.

In 2016 Sotheby’s auctioned the 1955 Jaguar D-Type for $21.8 million, selling one of the most important Jaguars to ever be produced. 250 horsepower, 3,442 cc DOHC inline six-cylinder engine with tree Weber carburetors, four-wheel disc brakes, independent front suspension, transverse torsion bar and a live rear axle trailing links. There has only been two private owners of the car since Ecurie Ecosse drove it to victory in the 1954 Le Mans. The 1955 Jaguar D-Type has remained in the same private collection for the last 16 years leading up to the nearly $22 million sale.

The D-Type was an overall winner of the 1954 Le Mans, driven by Ecurie Ecosse. During the race it averaged 104 miles per hour and topped out at 156 mph on the Mulsanne straight. Shelby Myers, a car specialist at RM Sotheby’s, was quoted saying, “It has an incredible racing pedigree, having won the most grueling contest in sports car racing, the famed 24 Hours of Le Mans, and importantly. What’s more is its amazing originality. Pure in terms of body, chassis and engine, there is no other Le Mans winner from this period that is as original as this car.” The 1955 Jaguar D-Type registers at number 8 on the list of 10 most expensive cars ever sold.

The 1939 Alfa Romeo 8C 2900B Lungo Spider was considered to be the equivalent of the Bugatti Atlantic of it’s generation. Like the Bugatti, In the Spider, Alfa Romeo combined the best engineering and styling of their generation in one thrilling package. It was one of only 12 Lungo Spiders to exist when it sold in 2016. It was the first time an “Immortal 2.9” was offered at a public auction in the past 20 years.

The car was offered out of the Sam & Emily Mann Collection, which include 50 of the most sought after collector cars. The 1939 Alfa Romeo Spider won the Pebble Beach Concours d’Elegance award in restoration by U.K. expert Tony Merrick.

Chassis number 2505 GT sold for over $18 million at a Sotheby’s auction in 2015 making it one of the most expensive Ferrari’s ever sold. It’s one of 16 open headlight SWB California Spiders in existence. The car features 226 horsepower and a 3.0 liter Colombo V-12 engine with three Weber carbs. Four wheel disc breaks, solid rear axle with semi-elliptical leaf springs, independent front suspension and a four speed manual transmission.

The car underwent a complete restoration at the Ferrari facilities in Maranello. During the restoration all mechanical systems were fully re-built and the car was refinished in the Blu Scuro exterior color over Pelle Beige interior. The restoration carried out by Ferrari Classiche is considered to be second to none and one of the most authentic models to exist.

Not only is the 250 GT SWB California Spider included in the 10 most expensive cars ever sold, but the model was also immortalized into pop culture history when it appeared in the 1980’s movie, “Ferris Bueller’s Day Off.”