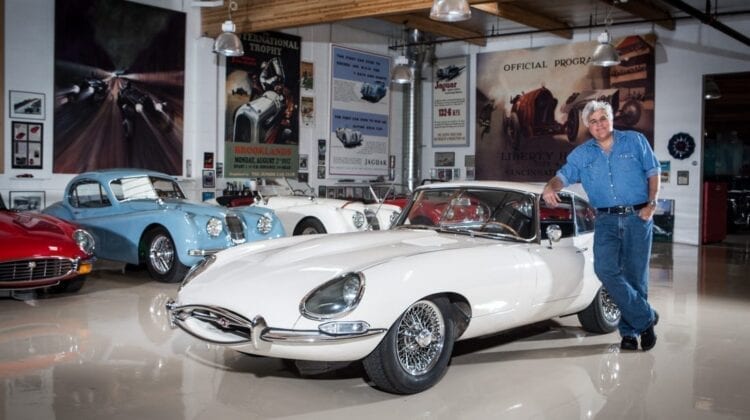 At last count, Jay owns 286 vehicles in his collection worth over $50 million. Some of the world’s rarest and unique vehicles are included in his “Garage,” which is actually multiple airplane hangers at a nearby airport in Burbank, California. Jay’s Garage became so well-known for his car collection that he decided to start producing videos to share on his YouTube channel, “Jay Leno’s Garage.” The channel features the cars he owns personally as well as featured vehicles from other collections. The channel has over 3 million subscribers and also airs on CNBC.

From Comedy to Cars

I absolutely love comedy, especially stand-up comedians. The amount of skill required to get up in front of a room full of people and make them laugh is mind-boggling. You hear interviews with great comics, and they describe how they became hooked on performing stand-up comedy, “It was like an addiction, a rush,” they would say. Comedian Jerry Seinfeld has described his Four Levels of Comedy, “Make your friends laugh, Make strangers laugh, Get paid to make strangers laugh, and Make people talk like you because it’s so much fun.”

Like Jerry Seinfeld, Jay Leno began his career doing stand-up comedy, eventually becoming the host of The Tonight Show with Jay Leno. He famously claimed that he never spent any of the money he made hosting The Tonight Show, living off only the money he made from his stand-up routines. What he was really interested in were cars. For decades he’s spent his free time building one of the most impressive car collections in the world. Since his early days in college working for Mercedes Benz changing oil, Jay has been a car enthusiast dedicated to learning about not only the fast cars people love but the stories and history of what makes them great.

So what’s in Jay Leno’s Garage? His personal collection includes a wide range of historically important, iconic, rare, and incredibly well-maintained vehicles. Anything from a 100-year-old Mercer Raceabout to a 2017 Ford GT can be found in his vast collection. Here’s a sampling of a few in Jay’s collection, which are not necessarily the most expensive vehicles, but a few of my favorites.

You can tell from his video on the Gullwing Coupe that Jay has a fond connection with Mercedes Benz. Not only did he work for the company as a kid growing up, but he’s also been able to get to know some of the racing legends over the years, such as Sterling Moss, who drove Mercedes as a Formula One race car driver. The 1955 Mercedes Benz 300SL Gullwing Coupe is valued anywhere between $2 and $3 million depending on the condition.

Jay begins his video of his 1994 McLaren F1 by saying it’s probably the greatest car of the 20th century. He adds that you will never see anything like it again, primarily because the rules have changed. The car is featured in a video where he takes it for a drive around Los Angeles and explains that the car does have a CD player. He says if you’re driving a McLaren to listen to the radio, “Get another car!” Jay also adds the McLaren has a rearview mirror, but you don’t really need it because “the chances of someone passing you is quite slim.”

The impressive thing to hear about Jay’s McLaren F1 is the timeless aspect of the vehicle. The design still looks modern, even after 25 years. While driving the car, Jay comments that it still feels like a modern sports car, which is pretty impressive. If anyone could tell the difference between a new supercar and a 25-year-old McLaren, it would be Leno. He drives virtually every make and model, including his 2017 Ford GT. To hear him comment that the McLaren still feels and drives like a new supercar is pretty amazing.

Jay also features another video where he takes the engine out of his McLaren F1 for a regularly scheduled, 20-year “extraction.” He’s definitely a worthy and dedicated caretaker of an incredible machine.

Under the hood of this car is a 27-Liter Merlin aircraft engine made by Rolls-Royce. These are the same engines placed in the P-51 Mustang aircraft used in World War II to shoot down German fighter planes and eventually win the war.

Jay features the 1930 Bentley 27-Liter, where he describes not only the incredible engine but the craftsmanship that went into the details of the car, as only Bentley could do. “Everything is oversized on the car; nothing seems it could fit on a regular Bentley except maybe the headlights,” Jay describes his Bentley. “You feel like your flying in the Battle of Britan every time you drive this thing,” as Jay takes the Bentley for a test drive.

There’s another comedian who could be described as a car collector fanatic. Jerry Seinfeld owns an impressive collection of over one hundred vehicles valued at over $50 million. There’s a great episode of Jay Leno’s Garage where Jerry Seinfeld makes an appearance to discuss a 1958 Porsche 356 and his love for car collecting.

Jerry Seinfeld just published a new book titled, “Is This Anything,” where he describes his experience in the early days of trying to be successful doing stand-up comedy. During a recent interview, he was asked if he was naturally funny or had to work hard for success. He answered, “There has to be a certain spark of life. It’s like the way a lighter works. You have the fluid, the friction, but the spark is what makes the alchemy of a bursting laugh. It’s an unearthly phenomenon. To control it is, it’s kind of like juggling fire. Like with baseball – what they do is try to get the percentages just slightly more in their favor. Choke up on the bat. Move just an inch. Lock my elbow up. Bring my hands down. Comedians are not risk-takers, they are risk eliminators.”

I enjoy hearing people talk about things they are passionate about and what drives them to become great. It’s clear people like Jerry Seinfeld and Jay Leno dedicated themselves to the craft of making people laugh through stand-up comedy. They both went on to have amazing careers in television and made lots of money along the way. But they never forgot their other passion, which was cars, and they’ve been generous sharing their enjoyment for car collecting with others over the years.

So, How Much is Jay Leno’s Car Collection Worth?

The greatest collections are the toughest to value. Incredible collections include such unique pieces that are very difficult to place dollar values because of their originality, rarity, and quality. You know you have a great collection when you cannot compare values to other similar items because nothing else like it exists.

This would be the case for many items in Jay Leno’s Garage. The dedication and care he’s taken to assemble a one-of-a-kind collection make it very difficult to give it a dollar value. For someone who has spent his entire life crafting his personal car collection with his heart and soul, I’m sure he would argue that the collection is priceless.