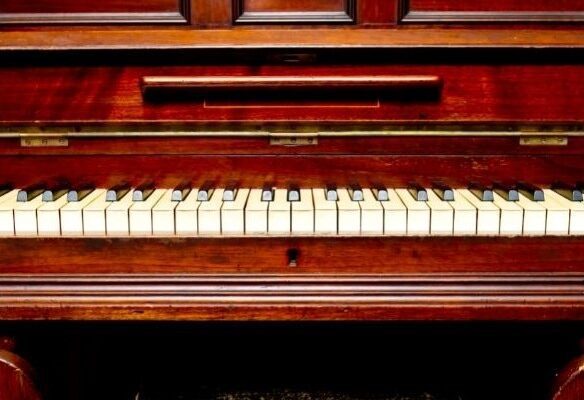 Perhaps one of the best examples of a long-term investment is buying a grand piano. The most expensive piano in the world has several factors making it an attractive item to buy and hold for the long term. Not only do you have the privilege of owning an incredible musical instrument, but if you choose the correct piano, it can be a solid asset to own for the long term.

Why Are Pianos so Expensive?

Why are pianos so expensive? They are made by highly skilled artists using the highest quality craftsmanship you could imagine. Pianos are incredibly complex and intricate instruments. From the woodwork to the ivory keys, hundreds and thousands of hours are spent constructing a single piano so it can be played with the perfect sound a musician will expect.

Another reason pianos are so expensive is the material is usually very high-end, rare, and delicate: hard rock maple, veneers, mahogany, top-grade spruce, and ivory. Virtually every component of a piano uses material that’s not easily found in bulk at your local Home Depot.

Many of the most expensive pianos in the world are grand pianos. In relation to the smaller “upright” piano, a grand has a much larger soundboard, longer strings, and fullness to the sound that an upright piano cannot compete with. The larger soundboard allows a greater volume of air to move and creates a lower bass tone.

Pianos not only showcase some of the most exquisite craftsmanship in the world, but they also capture historical and cultural significance. The Marilyn Monroe baby grand piano is an absolute treasure that could be worth millions of dollars. As soon as Marilyn began earning money as a model, she began searching for a piano.

Marilyn’s mother had purchased an old piano for her when she was younger, but when her mother was taken to the hospital, all their belonging were taken away, including the piano. Years later, Marilyn purchased an amazing baby grand, and it remained one of her most treasured items.

Signer Mariah Carey eventually purchased the piece of history. And if the piano was to be sold today, it’s anyone guess to the price tag of such a regarded instrument. Marilyn Monroe’s baby grand piano could easily top the list of the most expensive piano if it were ever offered on the open market.

John Lennon’s Steinway Model Z piano has an estimated value of over $2 million. Although Lennon purchased the otherwise unremarkable piano for only 1,000 pounds in London in 1970, he used the instrument to create his legendary song, “Image,” launching the piano’s historically epic status.

Do Pianos Appreciate in Value?

Pianos can appreciate or depreciate; it all depends on what you buy, when you buy it, and how much you paid for it. A well-built piano can be one of the most expensive instruments you can possibly purchase. If you’re buying a brand new piano, there’s a chance it could depreciate over the next few years of ownership.

One of the biggest factors in depreciation is the manufacture and brand of the piano. Steinway, Fazioli, Yamaha, and Bosendorfer are a few of the leading high-end piano building names. The top brand name pianos will hold their value. If you venture away from quality brand names, you run the risk of your purchase losing value due to quality issues.

If you plan to play the piano, then wear and tear becomes an issue, and depreciation can occur much faster. Pianos must be maintained much like your car, with regular maintenance and tuning required to assure it’s kept in fine working condition. When parts need to be replaced or serviced, they can become very expensive quickly.

With all the downside risks of owning a piano, there’s potential for price appreciation if you choose wisely. Just like a collector car, finding the right make and model and preserving it over the long term can potentially lead to the value of your piano increasing. There will always be a demand for incredibly well-built instruments assembled by the best craftsman in the world.

The Most Expensive Piano in the World

Bonhams auctioned off one of the most expensive pianos in the world when the miniature instrument from Casablanca sold for $3.4 million. During one of the most iconic scenes where Ingrid Bergman, playing the part of Ilsa, asks Sam to play “As Time Goes By.” The famous 58-key piano on wheels manufactured by Kohler & Campbell saw its moment to shine in the Hollywood spotlight.

Superstar musician Bono from the band U2 played a part in one of the most expensive piano sales ever. The event was for charity, and all proceeds went to The Global Fund to Fight AIDS, Tuberculosis, and Malaria in Africa. In 2006, Bono co-founded Red.org, an organization focused on creating innovative products using the color red to raise money and awareness to fight the AIDS epidemic.

During the Red.org event, the Steinway & Sons piano company donated an amazing one-of-a-kind unique piece of white and red piano made from maple, spruce, and cast iron. To test the sound quality of the incredible piano, before the bidding, Bono and Chris Martin from Coldplay performed U2s “Beautiful Day” and Lou Reed’s “Perfect Day.”

The Red Auction raised a total of $13 million, including the sale of the Red Steinway one-of-a-kind piano, the most expensive item. At the end of the event, the Bill and Melinda Gates Foundation matched the amount, for a total amount raised of $26 million for the event.

One of the most expensive pianos in the world is the Crystal Piano, made by Heintzman & Co., which was purchased at an auction for $3.2 million by an anonymous bidder.

The piano was played by superstar piano player Lang Lang in front of more than a billion spectators during the 2008 Beijing Olympic Games opening ceremony. At the Olympic ceremony, Lang Lang played a rendition of the Yellow River Cantata. After the event, the piano was retired, making the Olympic appearance its only performance.

The Heintzman piano is made with real crystal and was specifically designed for large concert hall performances. The amazing nine-foot piano has a completely transparent body with a sleek, futuristic style.

One of the most expensive pianos ever created is the Galaxy Piano. In a world full of unique piano designs, this one might be the most eye-catching of them all. Curved keys, an automatic lid, and a fiberglass body with 24-carat gold are a few of the features of this futuristic piano.

Only five Galaxy pianos were created by the UAE-based company. Most of the parts for the Galaxy instruments come from Germany, such as the keys, strings, and soundboard. The ultra-luxury company sees itself as a craftsman for fine items, not an instrument company. But that doesn’t stop the world’s best musicians from buying their products. Alicia Keys was rumored to have bought at least one instrument from the piano maker.

Famous glass sculptor John Kuhn was the mastermind behind another million-dollar piano creation. With help from L. Bosendorfer Klaviefabrik, the seven-foot instrument includes ridiculous design elements such as diamonds with gold leaves and crystal.

When a famous glass sculptor is involved in piano design, you know there will be plenty of polished and shiny jewels. In fact, over 100,000 jewels polished by hand-cut glasses are incorporated into the epic piano.

After four years of construction and inlays of 40 different wood types, the Sound of Harmony Concert grand piano was finished. It was custom designed by Chinese art collector Guo Qingxiang, and was used at the Expo 2010 in Shanghai. The piano was built by Steinway & Sons using ebony, ashwood, and rosewood at their factory in Hamburg, Germany.

One of the most expensive pianos in the world is the Crystal Piano, which was purchased at an auction for $3.2 million by an anonymous bidder. The piano was played in front of more than a billion spectators during the 2008 Beijing Olympic Games opening ceremonies. After the event, the piano was retired, making the Olympic appearance its only performance.

In 1887, Sir Lawrence Alma Tadema created a masterpiece. One hundred years later, Steinway and Sons decided to build a re-creation of the amazing piano. It features mother of pearl inlaid pieces and incredible hand-carved lid, case, and legs. The Alma-Tadema Steinway piano was not always the most expensive piece, as it was listed for $54,000 originally.

But a few decades of price inflation and appreciation for the craftsmanship that was poured into the Alma-Tadema launched its value to over one million dollars. I’m sure Sir Lawrence Alma-Tadema would be amazed to see the astonishing recreation of his original design.

The New York piano creator, Steinway, assembled one of the most expensive pianos in the world, revealing the Fibonacci, marking the companies 600,000th piano produced. This incredible work of art represents the Fibonacci Series proportion ratio, a numerological sequence that reflects the geometric harmony found in nature.

Designed by Franck Pollaro, the Fibonacci includes synthetic ivory inlays and a Fibonacci spiral made from six individual logs of Macassar ebony.

Over 1800 hours and 32 months of construction and the C. Bechstein Sphinx was complete. Valued at $1.2 million, it was designed as a historical replica of the first Bechstein piano built in 1886. Greek, Egyptian and Roman motifs are combined in the design.

There are so many more amazing pieces. The list of most expensive luxury pianos grows every year. Once you begin to learn about one incredible piano maker, the path leads to five more amazing creations. Piano manufacturers are relentless in their pursuit of the next heart-stopping piano design.

Some of the most talented piano builders began as humble cabinetmakers and steadily raised their skills to the top of their field. The La Mort Du Cygne piano was created by possibly one of the greatest cabinet makers in history, Louis Majorelle.

Four versions of the “La Mort du Cygne” were created. Two can be found as part of public collections. One will be auctioned soon, which could challenge the title of most expensive pianos in the world. A fourth mysterious version of the piano has yet to be located.

Pianos placed in the right hands can be a source of amazing entertainment and enjoyment. Properly cared for and maintained, pianos can withhold value and even appreciate over long periods of time.