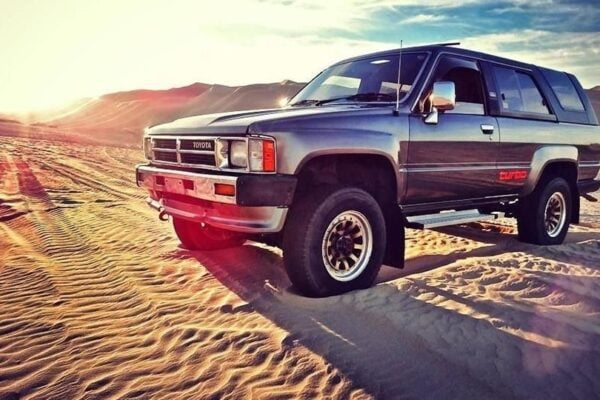 Of all the great vehicles Toyota has built over the years, the debate between 4Runner Vs Land Cruiser is one of the most intriguing. Road enthusiasts know Toyota as a company focused on creating dependable, long-lasting vehicles. The 4Runner and Land Cruiser are two of the best examples of Toyota’s commitment to quality.

But to choose between the large Toyota SUVs becomes difficult. The Toyota Sequoia and Highlander have been popular recently, along with the smaller Rav4. But two Toyota models stand above the rest, especially for older used models. Collector Land Crusiers are extremely valuable and sought-after rigs. At the same time, the early 4Runners are getting recognized as future collectible car gold.

The argument over a 4Runner Vs Land Cruiser is not easy. They both retain value extremely well, not only for the models specifically, but Toyota overall ranks at the top for resale value after five years for all their models.

History of the Toyota 4Runner

The Toyota 4Runner has always been a truck for handling rugged terrain. Since the first-generation model rolled off the line in 1984, the two-door, four-wheel-drive mid-sized SUV caught the eye of onlookers with its abnormally high ground clearance. By the mid-80s, the times were changing, and Toyota needed a rig for buyers looking for the ultimate sports utility vehicle.

The 4Runner was born from the Toyota Hilux pickup truck, simply adding a fiberglass shell over the bed and adding a second row of rear seats. While production of the Hilux continued, the SUV market was growing through the 80s as families wanted a vehicle to haul kids, dogs, and home supplies around the suburbs.

The fifth-generation 4 Runner design remains in production for over ten years. It’s pretty amazing to consider the 4Runner Toyota SUV has been in production without redesign for over ten years and has sold more vehicles than ever in just the last three years. While fans anticipate news of the redesigned sixth-generation 4Runner, they continue to buy the current model at a record pace.

The latest model, the fifth-generation Toyota 4Runner, is equipped with a 4.0-liter V6 engine producing 270 horsepower. A five-speed automatic transmission and rear-wheel drive come standard. Of course, four-wheel drive is available for superior off road capability.

There’s no doubt the 4Runner has enough power and torque to pull a boat or trailer; it can handle up to 5,000 pounds. However, don’t expect to get much gas mileage from the V6 engine. MPG is only 16 in the city and 19 on the highway.

One of the great things about the Toyota 4Runner is the feeling that you are indeed driving a real truck. Built with a solid rear axle and body-on-frame construction, the 4Runner feels a bit more like an 18-wheeler than an SUV. The best way to experience the comfortable ride of the modern-day 4Runner is to jump in for a test drive. The first thing you will notice is the “big-rig” vantage point out the windshield. The truck feel is real.

You might be wondering why used Toyota 4Runners are so expensive? It’s because the 4Runner has an excellent reputation for longevity, reliability, and durability. 4Runner’s hold their value so well because you could drive them for decades. The vehicles are built to last, and everyone knows it.

Although used vehicle values have been climbing over the last year, there’s still great used 4Runners if you search carefully. The third generation 4Runner from 1996-2002 could be the best bet if you’re looking for a great off-road vehicle. And there’s still plenty of them on the market to choose from.

Used 4Runner values have jumped over the last few years. Even with the surge in popularity, they are still an affordable classic. The best examples of first-generation 4Runners can be found for around $30,000, while good condition models can be found for $10,000 – $15,000. Used 4Runner pricing and re-sale values have been incredibly strong, and this trend shows no signs of changing anytime soon.

It’s harder than ever to find a good deal on a used vehicle. But there’s never been more information at your fingertips created by expert collectors to point you in the right direction. All you need to do is invest the time for research and have a little bit of luck bounce your way, and you could be the next owner of a classic 4Runner.

But what about the bigger, more expensive Toyota alternative – should I be searching for the legendary Land Cruiser?

History of the Toyota Land Crusier

The Toyota Land Cruiser has a long and rich history as Toyota’s longest-running series of models, selling more than 10 million units worldwide. Production of the Land Cruiser began in 1951, but the origins of the Japanese vehicle date back much further than that.

When the Japanese Imperial Army occupied the Philippines in 1941, troops found an American Jeep vehicle and immediately sent it back to Japan. The Japanese military directed Toyota to create a similar vehicle with slightly varying designs.

Toyota designed a prototype and called it the Model AK. Later, the prototype evolved into the Toyota Jeep BJ in 1951. Eventually, a trademark violation was sent to Toyota by the Willys Company, which had created the original Jeep. Director of Technology Hanji Umehara then promptly named the Toyota vehicle the Land Cruiser.

Values have been rapidly rising over the last year for 1980s Land Cruisers, just like the 4Runner. Classic car collectors are beginning to appreciate these vehicles as defining the beginning of the SUV era. 1980s Land Cruisers will forever be known as the vehicle that delivered the SUV to the world.

While a new Land Cruiser will cost over $85,000 for the base model, a used model in pristine condition could sell for nearly just as much. It’s amazing how well the Toyota Land Cruiser retains its value over the years.

The 4Runner Vs Land Cruiser Debate

Amazingly, Toyota produces two of the most iconic SUVs on the market today. Both have a great history and proven track record as reliable and durable machines with stunning on and off-road style. But when it comes to the 4Runner Vs Land Crusier debate, there are a few key variables to consider.

In terms of off-road features, both the 4Runner and Land Cruiser are body-on-frame SUVs. They are both somewhat similar, but a few distinct features give each one unique off-roading capabilities.

The cubic feet of cargo capacity and cargo space is greater in the Land Cruiser, and it generally has a smoother ride and superior performance. But remember the price point is nearly over double for the base models.

As for fuel economy, neither the 4Runner nor Land Cruiser has much to brag about in this category. Both vehicles get less than 20 miles per gallon on the highway. But what these two models lose in fuel economy, they more than make up for in rugged toughness, engine durability, towing capacity, and overall badness.

The big advantage of the 4Runner is the price. The base price for a standard 4Runner will cost only half the price of a Land Cruiser. With that significant savings, you still get a stylish, rugged off-roading beast with the 4Runner.

Another advantage is the slightly better miles per gallon. The Land Cruiser includes a bigger engine but weighs roughly 1,000 pounds more than 4Runner. While the 4Runner lacks the power of the V8 Land Cruiser, most folks are not buying either one of these two vehicles to drag race. The better choice for budget-conscious buyers would clearly be the 4Runner.

The Incredible Value of 4Runner

The first-generation Toyota 4Runner is quickly becoming a favorite future collector vehicle. If you compare the history of 4Runner Vs Land Cruiser, they each have earned their place as SUV legends. Maybe the Land Cruiser has the bigger name and longer history, but the 4Runner is gaining momentum as we speak.

The 4Runner has made a name for itself in just three and a half decades. Looking back to the 1st generation 4Runner, there is one particular model collectors are frantically searching for, and that would be the 1986 and 1987 Turbo.

Not only do you get a luxury interior with the turbo model, but you also get a rare digital dashboard and so many unique features that are not found anywhere else. Not to mention the Turbo, of course.

The Raddest 4Runner Ever Built

So if there was a hypothetical gun to my head, and I needed to make a quick decision, 4Runner Vs Land Cruiser, which way would I go? I would choose the rig in the video below—the 1986 Toyota 4Runner Turbo.

Now for the best part of this particular 4Runner model. Other than the turbo power under the hood and many unique features, these vehicles were extremely rare. Turbos were produced in the first generation only, and it’s hard to say how many were sold in total.

Less than one-half of one percent were reported to have the turbo engine by collector car insurer Hagerty. Tough to find, great-looking, rugged machines that last forever, sounds like a winning formula.

The turbo raises the 1st Gen 4Runner to the next level. The classic car and truck enthusiast is beginning to notice the legend of the 4Runner more than ever.

While some might still argue the 4th generation 4Runner sporting a V8 engine is the most desirable of the line, which is another damn solid alternative, my money is on the 1st gen turbo.

Toyota vehicles are notorious for lasting a really long time with little or no mechanical issues. Die-hard Toyota enthusiasts also love to share exactly how many miles their treasured vehicles have gone without breaking down. In the 4Runner Vs Land Cruiser battle, there are thousands of dedicated fans showcasing their high-mileage rigs. And it’s a beautiful sight to see.

The High Mile Club is a website dedicated to the ‘longevity of car ownership.’ The site encourages car owners to submit details on their high-mileage vehicles and what they love about them. Multiple vehicles report over one million miles and still going strong. Featured on the list of Hall of Fame members in the High Mile Club is a 2004 Toyota 4Runner with 554,000 miles on it.

Stories about high-mile 4Runners and Land Cruisers proliferate across the internet. It’s both refreshing and inspirational to see car collectors not only own for the long term but continue to use these tough trucks daily.

I’ve watched numerous YouTube videos of proud owners narrating their vehicles hitting milestones of 500, 600, and 800 thousand miles on the odometer. It’s pretty cool to see the pride of ownership and excitement people have for great vehicles that endure the test of time. In the case of 4Runner Vs Land Cruiser, both models have a raving fan club base because these rigs last decades and are still going strong.

It feels good to buy things that last. Everyone has experienced the feeling of buying a cheap alternative and knowing it will break down quickly or will soon be tossed in the garbage. However, most people also know the feeling of diligently researching quality products and making the right decision for something that will last, even if it costs a few bucks more upfront.

It’s no different with vehicles, and both the 4Runner and Land Cruiser are prime examples of virtually indestructible vehicles that will stand the test of time. In the 4Runner Vs Land Cruiser debate, you really can’t go wrong. Both rigs will continue to gain appreciation by collectors as far as the eye can see. Toyota solved the formula for timeless toughness with these two legendary trucks.